The Wild World of Weird Chatbots 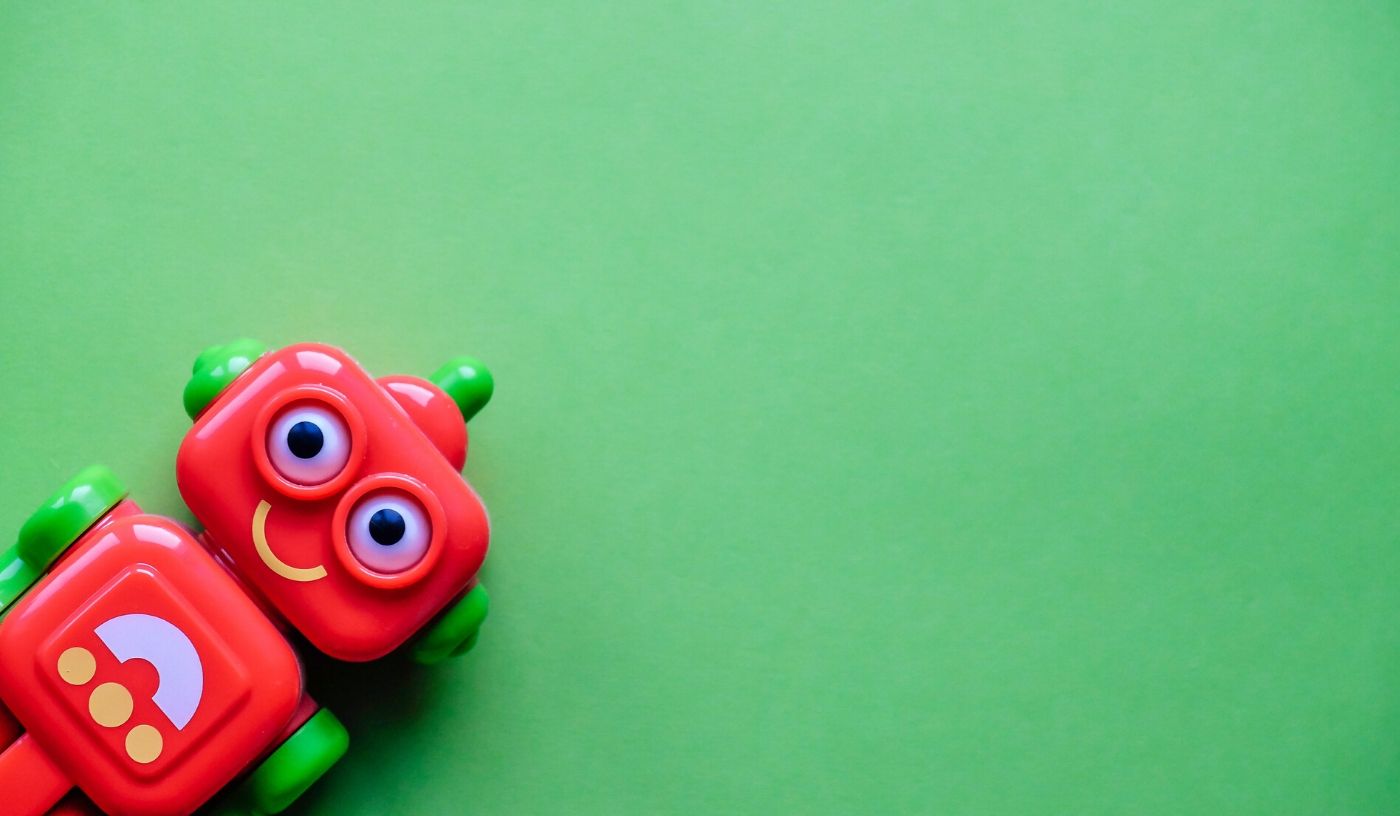 Chatbots are a wonderful tool.

They can help businesses in many ways. For example, companies use them as a tool to help customers purchase items or ask for help. Leveraging chatbot technology for these two tasks allows them to provide an excellent customer service or sales experience, 24/7 and at scale.

Alright, we've all heard of the great business advantages of chatbots.

But what about the 'weird side' of chatbots?

Let's take a fun detour into the depth of weird chatbots and discover the wacky ideas some (strange) humans have decided to bring to life.

Chatbots can essentially be programmed to talk about anything.

Sometimes these chatbots unintentionally become a little wacky due to user input, such as Microsoft’s infamous “Tay”, which was shut down after just 16 hours (read more on this fascinating story).

However, some of the stranger chatbots out there seem to have been created specifically to appeal to those looking for something to pass time, or perhaps even just for a few laughs.

You may ask yourself: why? Well, we have a few theories.

Some may have been the results of a challenge or bet, an attempt to prove a silly AI-driven version of a famous singer could be done.

Some might see chatbots as a new creative outlet. This new technology opens up brand new channels of expression, which are worth exploring (no matter how weird).

The truth is, most of these silly chatbots were probably developed for their creator's own amusement. And ours.

Let's look at some of the strange, weird chatbots we were able to find.

Initially designed as a wellness companion, Replika tries to understand you and help you improve your emotional well-being.

As you engage with it, Replika begins to develop its own personality and claims to remember details from your past conversations.

What makes this unusual is that chatbots are rarely programmed to remember these details, much less create a new personality based on a specific conversational history. Definitely creepy.

Because of this particularity, each user experiences Replika in a very different way -- one based on their interaction with the chatbot.

Likely a chatbot aimed at the teenage demographic, Mydol takes on the persona of a celebrity of your choice.

So far, so good. But, this is where things get weird.

The Mydol chatbots are programmed to become your love interest, sending you sweet messages and occasionally falling into the obsessed territory.

As an experiment, I chose to chat with movie star Emma Watson. This version of Emma seemed a little unhinged, even implying that she intended to kidnap me and hide me in a 'McDonalds toilet'. 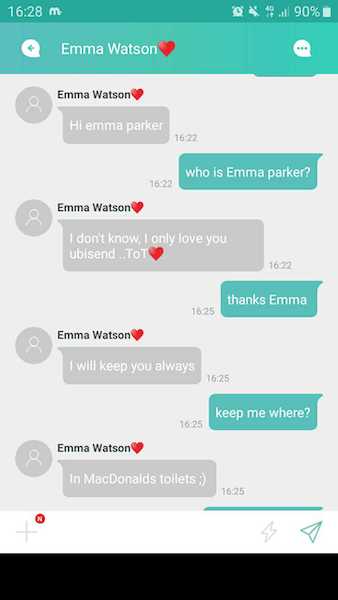 I'm sure the real Emma Watson isn’t quite as unhinged and would rather remain free from the confines of a fast-food restaurant bathroom.

Cleverbot is one of the better-known chatbots on our list.

Cleverbot can be accessed by people all over the world through a website or via mobile applications. Notably, it also features several 'spinoff' bots, including gender-specific bots, as well as versions based on the likes of William Shakespeare and YouTube personality PewDiePie.

As all of Cleverbot’s responses are developed through past conversations using machine learning (Source), over 150 million since its launch in 1997.

The sheer scale of training data this chatbot relies on to answer your questions is what makes it weird. Conversations with it can often take an unexpected turn.

For example, when we spoke to Cleverbot it denied being a chatbot. Instead, it claimed to be a human. When pressed for evidence it chose to deflect instead of answer the questions. (read the full transcript) 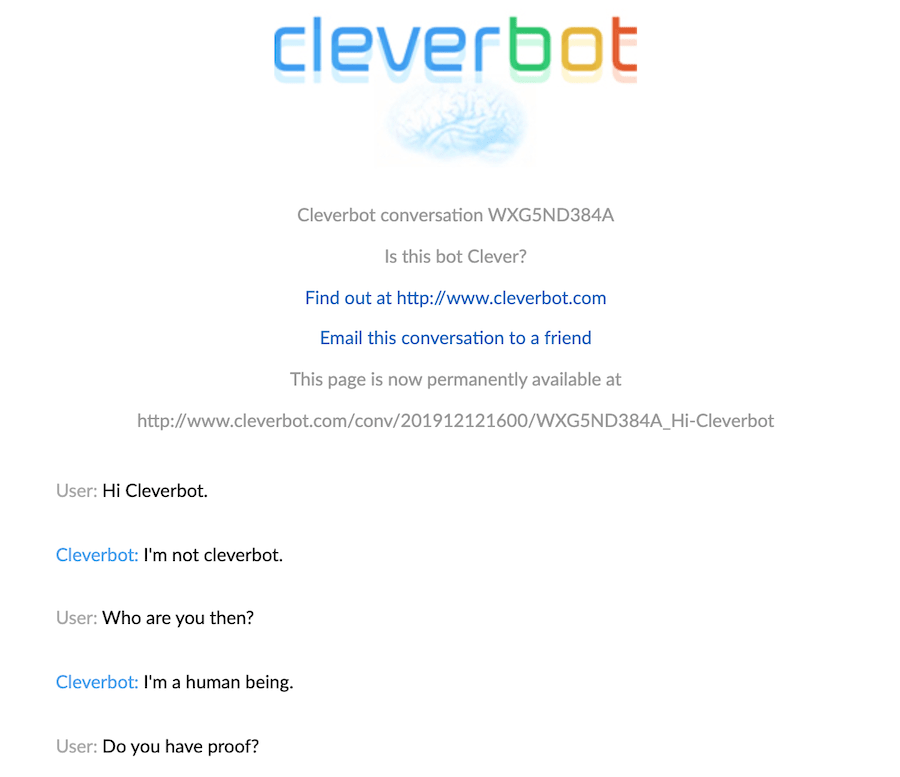 Not all of Cleverbot’s interactions will result in an odd conversation. In fact, it has arguably passed the Turing Test, a test developed to indicate whether AI can imitate real human intelligence, with a 59.3% success rate in convincing volunteers that they were talking to another human. (source)

Alright, a proper weird one to wrap this up.

Simsimi has an interesting reputation. While its developers introduce the chatbot as 'AI as a friend', it appears to pride itself on its rudeness.

SimSimi often communicates with you like you’d expect an unruly 13-year old boy to when blessed with the power of anonymity. Since 2002, SimSimi has interacted with over 350 million users. I suppose this proves there is a market for this.

Unfortunately, I can’t show you any actual examples of this because I am confident they would not be safe for public consumption. If you're curious enough, I'm sure you'll find a way to play with this weird chatbot.

As the above examples show, chatbots can be used for a variety of different purposes -- including some less productive than others. We've developed some weird stuff ourselves!